A romantic wedding between skulls, red roses, candles and velvet.

Mª Ángeles and Enrique’s wedding is one of those weddings that will forever have a very special place in our hearts. And it’s not just because it’s a themed wedding, a gothic wedding, so unusual. It is above all because of the beautiful relationship that we keep from all the times of preparations with the bride and groom. And they are one of those people who come as customers and stay as much more.

From the beginning, both of them fully trusted us to help them organize their entire wedding. As wedding planners, we advise them from the beginning, from the search for space, catering, and all the needs that arose around their wedding.

In one of the many meetings we had with Mª Ángeles, we started talking about the cake, and when she showed me the ideas they had, what they both liked, I asked her: do you like the gothic style? And she told me, yes! And it was like that, when I proposed to give a gothic touch to the wedding.

We tried at all times to be elegant, more in the style of Interview with the Vampire, than the traditional classic gothic. For this we flee from excessive clichés and create something very personal for them. We work with a color palette where black, gray, red and purple were the chosen tones. Lighting, as you will discover later, played a very important role, based on indirect lights and candles.

So discover this Gothic wedding, where, without a doubt, we surprised all their guests, that on the wedding day, they experienced a Gothic wedding firsthand.

For the preparations, both got dressed in the Hotel Palacio de los Patos. Without a doubt, all its suites are an architectural marvel and a perfect space for preparations. In the heart of Granada in a unique enclave, this old palace has exquisite suites inside, all different and special.

Enrique dressed surrounded by his brothers and his mother. In a suite where its wooden ceilings and windows were part of the perfect setting for his preparations. He is passionate about art and this space suited him perfectly.

All the groom’s preparations were perfectly cared for, from the shoes to the small details, all of them in keeping with the gothic theme of the wedding.

The suit, without a doubt, was one of those choices that gave personality to the groom’s look. Boyfriends He opted for a black suit with a burgundy and gray print with a lot of personality and that fit him like a glove. Diakara Novios was in charge of dressing the groom.

Enrique complemented his look with a wristwatch and personalized cufflinks, all in keeping with the aesthetic of the wedding.

In the preparations, he was accompanied by his mother, who also chose red as the color for both her dress and hairstyle. A godmother of impact.

Mª Ángeles visited with her family in another of the hotel suites. A room with lots of light where we also take care of all the details and accessories of your look, from the dress (a total look by Pronovias), through the shoes and accessories.

One of the details that undoubtedly surprised the most was the spectacular bouquet that Carolina Bouquet designed for Mª Ángeles. A bouquet in reds and blacks, which was a true work of art.

We finished the bouquet with a long burgundy bow from which hung a cameo with a photo of the bride’s parents. Mª Ángeles complemented her look with a porcelain headdress with white and red flowers that fitted perfectly with the back of her dress, where the back stood out with tattoo effect lace.

Undoubtedly, Mª Ángeles surprised with a romantic and elegant look where all the details were taken care of, and that she finished off with a beautiful updo and makeup that enhanced her features.

The ceremony was held in the Iglesia del Sagrario Catedral on a hot August afternoon, when the sun shone like never before. Enrique, accompanied by his mother, walked down the aisle of the Church and waited for Mª Ángeles at the altar.

Mª Ángeles arrived in a classic car at the Church, a 1951 Mercedes Benz 170 SD, from the company Bodas y Coches. Paco, Enrique’s brother, who was the godfather, accompanied her. And there we received her, to help her get out of the car and walk the last few meters to the altar.

Mª Ángeles was radiant, she gave off that special glow of happiness that we love about our girlfriends. She radiated joy and happiness, and that carried throughout the ceremony.

Accompanied by their family and friends, some fifty people, we lived with them a very emotional and special ceremony.

At the end of the ceremony, all their guests and a large group of onlookers waited for them with a rain of colored rice, to receive the newlyweds.

Mª Ángeles and Enrique chose a beautiful and charming Rural Hotel for their wedding celebration. La Huerta Nazarí, is located in the town of Alomartes, about 35 minutes from Granada. A rural hotel in the middle of nature where they celebrated their wedding and all their guests stayed.

As soon as they arrived at the Hotel, the bride and groom took advantage of the environment to take their wedding photos, which, as we have indicated, Alejandro Onieva took care. La Veta Films was in charge of their wedding movie.

Without a doubt, in a thematic wedding, the staging work becomes the great challenge at the design level. And as you can imagine, in a Gothic wedding, there are certain elements that are key and we have to take care of as much as possible from the beginning.

In the case of the gothic wedding between Mª Ángeles and Enrique, this work began with the design of the stationery. We worked as a team with Petipress, who did the design of the invitations, the seating plan and all the wedding posters.

Once we had defined the color palette and the stationery as we mentioned earlier, the next step was the staging at the level of furniture, props, floral decoration, etc.

For this, teamwork with Catering La Borraja (who provided tables, chairs and utensils) and with the florist and decorator, Carolina Bouquet, who was in charge of the rest of the elements (flowers, props, fabrics, etc.) was essential.

The result was an important staging where each element brought you closer to the theme, in an elegant and very romantic way.

At the gastronomy level, we also work side by side with the catering to personalize the menu as much as possible. From the cocktail, we take care of the staging to the millimeter and we even adapt cocktail references to the theme, such as the cheese macarons, which became purple and have a raspberry crunch.

As night fell, the area where the dinner would be held, acquired a more Gothic aesthetic. The decoration of the space was stained at night and smoke. To do this, we organized the entrance of the bride and groom, who did so with two flares of smoke that stained the space with a dark mist.

Dinner around the pool made the evening super pleasant for a summer night in August. In addition, the decoration became much more relevant when lighting the candles and chandeliers.

Each of the dinner dishes were adapted to the gothic theme of the wedding. The first, “Ambrosía” was a tomato soup with cockles that simulated a blood soup; the second, “La Estaca”, was an old cow on a cream of Granada that simulated the blood of having been nailed by the stake; and finally, the dessert was a “Draculín” of chocolate and red fruits that we have eaten so much as children.

And as in any wedding, the couple cut the cake, a cake with skulls and flowers that had a band that said: “Until death do us part.” And how could it be otherwise, the bride and groom cut it off by driving a sword into it, like a stake.

After dinner, the bride and groom were able to enjoy the gothic cake and sweet table that Lussocake prepared for their wedding. A table that did not lack detail, according to the theme of the Gothic wedding.

At the party, we take care of all the details, and among other things, the guests were able to enjoy a cocktail of “vampire blood” while enjoying the bride and groom’s dance, under more than adequate red lights. 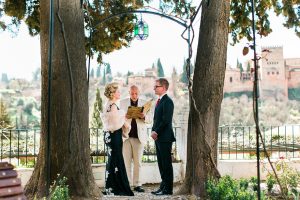 Lacy and Tony’s Elopement in Granada

María and Antonio’s wedding in Malaga: a full color wedding

You can find out more about which cookies we are using or switch them off in settings.

This website uses cookies so that we can provide you with the best user experience possible. Cookie information is stored in your browser and performs functions such as recognising you when you return to our website and helping our team to understand which sections of the website you find most interesting and useful.

Strictly Necessary Cookie should be enabled at all times so that we can save your preferences for cookie settings.

If you disable this cookie, we will not be able to save your preferences. This means that every time you visit this website you will need to enable or disable cookies again.